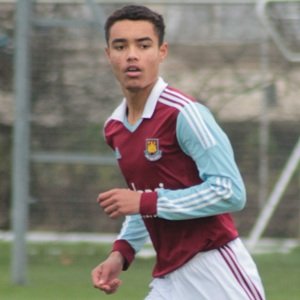 Promising teenager Josh Pask has decided his long term future lies with the Hammers after turning down interest from Arsenal and various other top clubs!

Sixteen-year-old Josh is to stay with the Academy where director Tony Carr MBE said he and his coaching staff will continue their relationship with a player who has been with us since he was eight years old.

And Tony declared: “We are obviously delighted that Josh has decided that his long-term future lies with West Ham United

“Many top clubs, including Champions League clubs, were chasing Josh, so we were delighted to fight them off for his signature.

“Josh spent most of last season with the Under-18s and quickly proved himself as a 16-year-old.

“We now look forward to developing him over the next few seasons and hope he will be a first-team player for West Ham in the not too distant future.”

Pask, who will start life as a full-time scholar when the U18s return to Little Heath for pre-season training next week, is a tall and composed centre-back.

Carr is looking forward to developing the game of a player who could walk the same footsteps as Rio Ferdinand and  James Tomkins.

Carr said: “Joshis from Manor Park, so he is a local boy and we are delighted that he has stayed loyal to his local Club.

“He is a centre-back who is very tall and lean, quick over the ground and good on the ball and in the air. He has a great attitude and goes about his game in a quiet but effective way.

“We look forward greatly to working with him and moving him up to the Under-21s as soon as possible.”