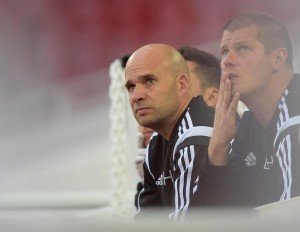 The Hammers development squad lost 5-3 to Bilbao Athletic tonight at the Boleyn ground in the first group game of the Premier League International Cup. West Ham got off to a poor start after a defensive mix up which allowed Jorge Luis Garcia to score for Bilbao after two minutes. On 19 minutes a cross from Lewis Page found Fanimo who beats his man and fires a vicious shot across goal, his shot is deflected to make it 1-1. Bilbao scored two more goals to make it 3-1 at half time. On 77 minutes Elliot Lee pounced on a Pask’s knock down from a Bywater’s free-kick to make it 2-3 and it it was game back on.  On 91 minutes Garcia scores from a free-kick to make it 2-4 to Bilbao Athletic. In the remaining crazy 90 seconds both sides scored late on to make it 5-3, the West Ham goal from Bywater with a curling shot from the edge of the box.

The other groups are as follows…