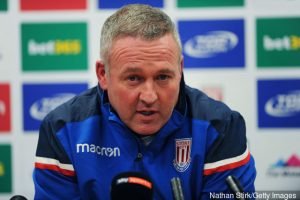 Stoke City boss Paul Lambert has defended West Ham boss David Moyes against the critics who claim that he is not the manager he was at Everton.

Lambert will lock horns with Moysie in a desperate relegation battle on Monday night when the Hammers will be looking for one of those rare doubles over Premier League rivals.

And with the ‘Arnie ‘ factor probably uppermost in his mind after the former Potters hero’s none goals for the Irons this season he seems determined to  play it cool ahead of the game.

Spells in Spain and Sunderland after his Manchester United sacking have given ammunition to those who claim the Irons boss is a spent force.

But Lambert is having none of that and said on Stoke’s official website: “David Moyes is an experienced manager and has his ups and downs, as has any manager, but he has gone in there and steadied the ship.

“He is a really top manager, and he cannot be judged on just one or two jobs that never went his way.”