Striker target in talks with club

Hammers striker target Andrea Belotti is set for talks with Torino over signing a new contract.

Belotti has previously been reported as a target for the Irons, with Torino Granata reporting that the Hammers were interested in a deal to secure his signature back in May. 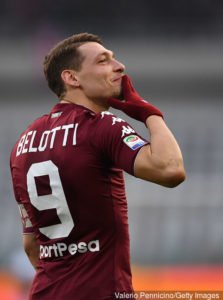 The striker has been remarkably prolific for the Italian club since joining back in 2015, and has scored 107 goals in 237 appearances for them.

Tuttosport, via Inside Futbol, now reports that the club are still hoping to hand him a new contract and are set to hold talks with him in the next few days.

Belotti is currently Torino’s captain and has already scored twice this season, in eight games, and his current deal is set to expire in 2022, at the end of the season.

The Irons will almost certainly be keeping a close eye on his contract negotiations; if talks do break down, a transfer bid may become a possibility in January.