Striker target may be available again

Armando Broja may become available in the January transfer window, according to a new report.

The Hammers explored the possibility of signing Broja from Chelsea in the summer, but ultimately settled on signing Gianluca Scamacca from Sassuolo. 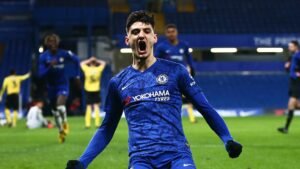 However, The Athletic now reports that Chelsea are looking to do a deal for Borussia Dortmund striker Youssoufa Moukoko ahead of January, and that could mean that Broja becomes available.

He actually suffered a knee injury in a friendly over the weekend but the severity of that issue is currently unknown.

Broja impressed on loan at Southampton last season but has struggled to make an impact in Chelsea’s first-team and has scored just one goal in 12 Premier League appearances this season.

The Albania international has a lengthy contract until 2028, allowing Chelsea a degree of protection over his fee, and it remains to be seen if boss David Moyes is tempted to go back in for the centre-forward, having scouted him so thoroughly in the summer.