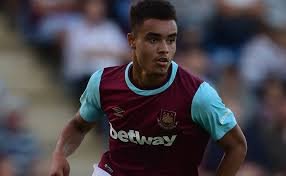 Josh Pask’s third minute goal gave the Hammers under 23s a brilliant victory over top of the table Liverpool in Premier League Two Division One.

And the win all but secured the team’s place in the League for next season after their promotion last term.

Pask (right) scored after the Liverpool defence had failed to deal with Browne’s ball in and that turned out to be sufficient to take the team into sixth place on 25 points with five games left.

In fact the Hammers controlled much of the game and could have had a second had Afoloaya shown more composure in front of goal after fine work from Hector-Ingram.

Then Browne went close with a floated effort which beat the crossbar before Liverpool’s Chada spurned a chance near the end as the Irons ran out worthy winners.

Afterwards academy chief Terry Westley told ClaretandHugh: “I was thrilled with the boys. They showed desire, grit, determination and real quality to get that win.

“I put out a very young team and I am seriously proud of the way they performed. Marcus Browne, Grady Diangana, the back four and keeper Nathan Trott were all very good.”

One comment on “Stunning victory as youngsters see off leaders”