Posted by Sean Whetstone on September 8, 2014 in News 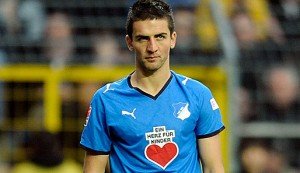 Bosnian World Cup star Vedad Ibisevic has confirmed the Hammers were knocked back in a bid for him over the summer transfer window. Stuttgart knocked back an offer believed to have been £7m for the 29-year-old striker before moving their attentions on to Enner Valencia and Diafro Sakho.

The 6ft 2in striker scored against Argentina in Brazil in the World Cup finals and has scored 47 goals in three seasons at Stuttgart. But the German side was determined to keep him and have opened talks over a new contract for Ibisevic.

“I stayed, but you never know. If a good offer comes in, I may leave,” said Ibisevic. “Vahid Halilhodzic and Trabzonspor contacted me and offered me great conditions. West Ham also wanted me, but Stuttgart did not want to sell this summer. The club has made some changes and the goal is a mid table position. I have bigger ambitions so that is why I say I may yet leave.” he told  Tutto Mercato.