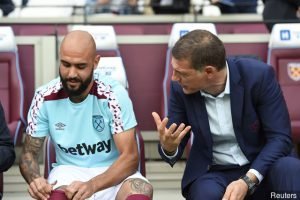 West Ham Chairman David Sullivan has talked about last summer’s transfer signings insisting two of them will still come good for the club while voicing his disappointment about the two strikers he took on loan last season.

David Sullivan told Jim White and Tony Cottee on Talk Sport radio: “I like a couple of players we signed last year, I think they will come good for the club, Arthur Masuaku will come good, I think Edimilson Fernandes will come good. They are both players which cost around £5m each. They will turn out to be very good buys for the club but the strikers, we signed two strikers on paper. They were strikers on loan with options to buy as had a had a doubt about them. It is beyond our belief not how badly they both were. Calleri worked his socks off but couldn’t score and Zaza looked like he was totally disinterested”

9 comments on “Sullivan: ‘Calleri couldn’t score and Zaza was disinterested’”