Sullivan exclusive: ‘Our amazing fans never give up’ 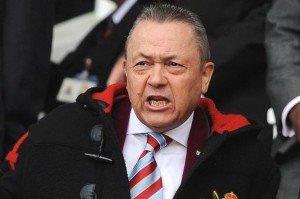 David Sullivan was thrilled with the result at Stoke City and the part the fans played in  it!

The Hammers were certainly not at their best against Stoke City but battled brilliantly for a share of the spoils at one of the toughest places in the country.

And the co-chairman was thrilled telling ClaretandHugh exclusively: “We were below our best, but we are a team with goals in it and that’s what made the difference.

It’s over three years since we’ve come back from a two goal deficit to get anything from a league game.

Our travelling fans were amazing even at 2-0 down they were singing loud and nobody left or gave up.

When you feel semi disappointment from an away draw it Stoke it shows how much better we are this year than last !

← Cresswell’s big chance…and Noble too!
Leroy: ‘Sparky’ Hughes tries to have it both ways →
Click Here for Comments >