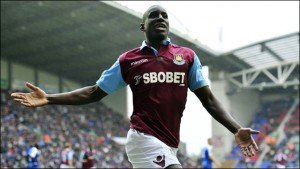 David Sullivan has declared that the Irons tried to bring back Demba Ba during this window.

The former Hammers striker – currently playing for Chinese club Shanghai Shenhua – was definitely a target but Sullivan explained that  injury put an end to the club’s interest.

He said: “We were told that he was three or four weeks away when we first inquired but he remains about five weeks away now so it didn’t happen.”

The 31 year old scored seven times in 11 games for us back in 2011 before moving on to Newcastle and Chelsea, Besiktas and ultimately his current Chinese club where during 2015 he found the net 20 times in 29 games.