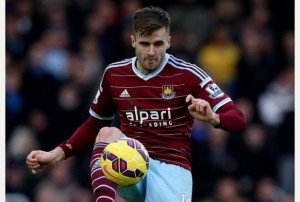 Carl Jenkinson’s switch from Arsenal to West Ham now appears to be more or less nailed on.

Gunners boss Arsene Wenger is ready to let the defender know of his decision to let him leave the Emorates and his agent will enter talks on personal terms once a fee has been agreed with Arsenal.

The right back is determined to stay in London and has become a popular member of the Irons dressing room.

But it is the relationship between David Sullivan and the player’s agent which is likely to prove the clincher and which brought the player to Upton Park in the first place.

The two sides pair were quickly in touch with each other when it became clear he would be allowed out on a season-long loan and both are keen to make the move permanent.

Jenks has loved life in the east end and is one of the most regular player interview subjects on the club website.

The tricky business will be in agreeing a fee with Arsenal who will start at £8 million but the final fee is set to be around £5m – £6m.