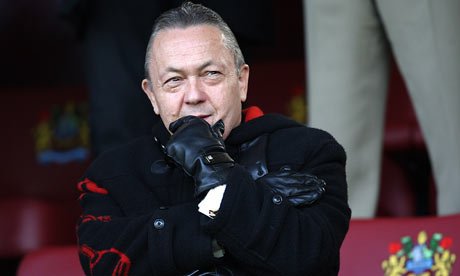 West Ham co owner David Sullivan accepts he has a tough job ahead attracting flair players to the club with the funds the club has available.

Club legend Billy Bonds declared on a ClaretandHugh exclusive that a lot of investment was required top being in the type of players the club want.

And the co-owner has taken up the point readily admitting:”It won’t be easy.”

Sullivan and his co colleague David Gold admitted ibn a club statement when confirming that manager Sam Allardyce would takethe club into the new season that more entertaining football was required.

The statement read: “After listening to feedback from supporters, the Board have insisted on improvements to the set-up of the playing and backroom staff to ensure the team provides more entertainment next season.”

However, with a transfer kitty of around £25 million available it may prove very hard indeed to attract and fund the kind of creative and attacking players required to carry out the remit.

Speaking to ClaretandHugh Sullivan asked the fans to be patient whilst the hunt went on.