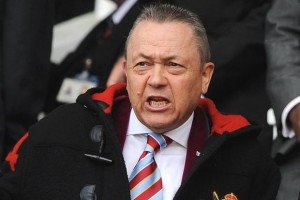 David Sullivan has again raised the “Wilfried Bony v Andy Carroll debate”  and the big difference of opinion it cause between himself and Sam Allardyce!

The co chairman repeated that he would have signed Bony but eventually bowed to the judgement of the manager.

It means that Carroll cost him a £16 milllion transfer fee and £80k a week wages – half the Carroll deal in both cases..

Swansea are understood to be willing t listen to offers for the in-form striker, who had scored nine goals this season – the same as Diafra Sakho who has revealed recently that he was a Sullivan signing

← Sam: “Henry certainly one for the future.”
Irons won’t budge as 14 clubs wait in wings →
Click Here for Comments >