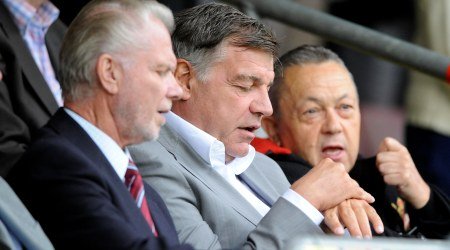 West Ham co-owner David Sullivan has repeated that no decision will be made on Sam Allardyce’s future until the end of the season.

And in an outspoken interview with sky Sports he declares: “”He has an image of being some sort of rough northerner and probably not very bright.”

But he added his relationship with Allardyce has always been good and the two of them have never had a cross word during the 60-year-old’s reign at the club.

He said: “It’s very amicable, we have never had a cross word. Sam is an intelligent, smart person. He has an image of being some sort of rough northerner and probably not very bright – this is the image I would say.

“Fans are warming to him but he’s from the north and West Ham is a London club. We didn’t play the best football at the time but I don’t think it was as bad as people said. They are warming to the new Sam, and the new West Ham, and the way we are playing.”

When asked if Allardyce would be the manager to lead the club into the Olympic Stadium for the 2016-17 season,
Sullivan added: “In all probability but he might be the manager of Manchester United or the manager of England, anything is possible in football.”

← Sherwood: “Only Sam could have done this”
Lee back at Irons for hamstring check →
Click Here for Comments >

One comment on “Sullivan: ‘Sam has a “rough northerner” image!’”