The club want to offer the Spanish stopper a three year deal with an option for a further two years whilst Rice is wanted on a long term deal.

A Hammers insider tonight told ClaretandHugh that new deals are on the way for both players as the club really attempts to push on next summer. 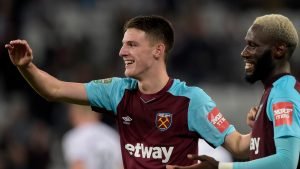 on June next year- will sign a new deal.

The youngster could be set to see his wages rise from around £4k a week to between £15-£20k basic with extra payments for substitute roles and first team appearances.

He is still some way behind Reece Oxford in earnings who, having been handed a bumper deal  18 months back, has failed to capitalise on his early potential.

There are no such fears for Rice who has made a real impact this season and is a youngster whose love of the club is such that he is already being dubbed the next Mark Noble.

← Slave Bilic: ‘I should have left after the second season’
Hammers wage savings boost for summer window →
Click Here for Comments >