Sunday verdict from the pundit we love to hate 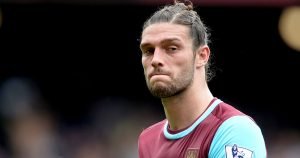 Mark Lawrenson has delivered his Friday verdict on Sunday’s game and hardly surprisingly he’s going for an Arsenal win.

In his BBC column he declares and points to Andy Carroll as probably being a big influence over the closing games.

He said: “Getting Andy Carroll fit is a big bonus for West Ham because he can come on for the last few minutes and cause mayhem, like he did in their draw with Stoke.

But it is a big ask for them to go to Emirates Stadium and get anything there – on home form alone, Arsenal are third in the table, just two points behind Manchester City.

The Gunners have been making lots of changes for their league games in between Europa League ties but they do not play the first leg of their semi-final against Atletico Madrid until Thursday, so I would expect Arsene Wenger to field a strong team.”