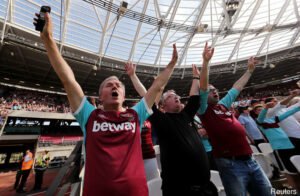 A Claret and Hugh poll of almost 1,000 readers has revealed many supporters believe West Ham will survive from being relegated from the Premier League this season.

Top answer 11-13 points by 38% of respondents giving the Hammers a total 38-40 points which should be enough this season to survive.

The second most popular answer by 20% of readers was 8-10 points giving the Irons 35-37. Some commentators believe 37 might be enough this season but 35 might not be enough.

The super optimistic remainder of 8% of readers claims that the Hammers will score between 17-27 points finishing the season on a total of between 44 and 54 points for assured safety.