Posted by Sean Whetstone on April 30, 2019 in News, Whispers 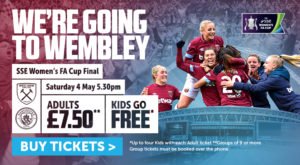 The vast majority of Hammers supporters will still attend the West Ham v Southampton Premier League game at the London Stadium at 3 pm with 60% saying they will be there on Saturday afternoon.

Just over 7% of readers say they will be skipping the Premier League game and will instead be going to north London to watch the West Ham women at Wembley take on Manchester City women in the Women’s FA Cup final.

Another 3% of supporters taking part in today’s Claret and Hugh poll plan to leave the Southampton game in East London at half time to make their way to North London to do both.

The remaining 30% of those who answered the poll say they will watch one or both from home on their TV or computer.

West Ham Women managing director Jack Sullivan has revealed that West Ham has sold over 4,000 for the Wembley final so far.