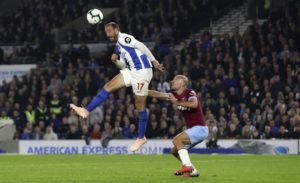 Claret and Hugh readers are split on the result of the Brighton v West Ham game this afternoon.

Brighton have the slight upper hand in recent form but both teams have 18 wins apiece over their whole history.

Bookies have made Brighton the 6/4 favourites after their 3-0 win over Watford, while West Ham are 2/1 and a draw is 9/4.

A repeat of the 2-2 draw from last January at the London Stadium is priced at 14/1.