Chris Sutton believes West Ham will get beat by Leeds in their mid-week clash.

Hammers boss David Moyes is under increasing pressure, having lost the last five games in the top-flight. 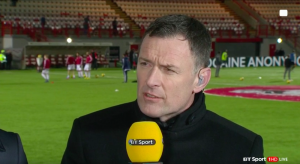 The Irons were beaten by Brentford on Boxing Day and now face Leeds in a huge encounter that could be decisive for David Moyes’ future.

Leeds have been in equally disappointing form and haven’t won any of their last three, although they did grind out a hard-earned point against high-flying Newcastle last time out.

And Sutton, who has taken over from Mark Lawrenson in predicting the results of every matchday, believes that Leeds will pile even more misery on Moyes and the Irons this week.

Speaking to BBC Sport, the ex-Blackburn striker backed Jesse Marsch’s side, saying: “Leeds gave Newcastle a decent game last time out and defended well to get a draw. Ordinarily, I would say the way they play suits West Ham, but, whatever is wrong with the Hammers, I don’t see it improving here.

“David Moyes’ side have lost their past five Premier League games while only scoring twice and that lack of goals is probably their biggest problem.

“So, I am writing West Ham off here – although I’ve been wrong about them so often this season, that is probably good news for their fans.”

Sutton has predicted that Leeds will win the game 2-1, a result that would surely send shivers down the spine of Moyes and his coaching staff.