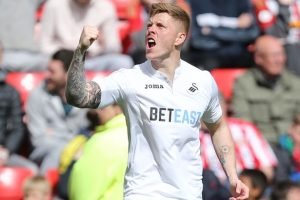 Key Swansea defender Alfie Mawson could well be missing for their crunch clash with West Ham in two weeks.

Mawson was very much on the Irons wanted list in the winter but the Swans were unwilling to entertain any sort of bid for the central defender.

Now, the England under-21 international – having been picked to start in the Swans’ FA Cup fifth round tie against Sheffield Wednesday –  limped away during the  warm up with a suspected ankle injury.

Mawson has been very much a part of new manager Carlos Carvalhal’s revival over recent weeks but has only a reported 50-50 chance of making the game.

It’s a boost for the Irons whose squad are returning to full fitness but who will need to be at their best to overcome a Swansea side which has only lost once since the new manager’s arrival and have recorded wins against Liverpool and Arsenal  during a nine-match unbeaten run.