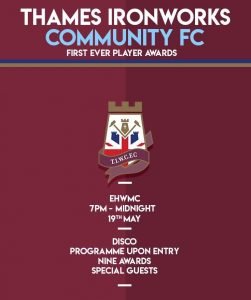 After a hugely successful first season for Thames Ironworks Community FC  are holding an awards evening.

If you fancy supporting a grassroots team run by West Ham fans read on.

The first player awards evening for Thames Ironworks Community FC will be held at the East Ham Working Men’s Club. The night will consist of a few words from personnel involved in the fan run club as well as the presentation of nine awards which will be handed out by special guests before finishing the evening with a 3-hour disco. Each guest will also receive a programme upon entry.