The Hammers have come so far in just two years 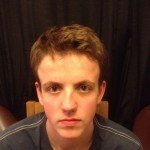 is a rising young journalist with a big future. He first visited the  Boleyn in 2011 for a press conference when  Sam Allardyce was talking up our Championship-dwelling side’s promotion hopes. Here he offers his thoughts after covering his first game at Upton Park!

There were just four journalists  in attendance on my first visit to Upton Park but it was standing room only at the Irons after the Hammers’ 3-1 win over Southampton.

And that is a sign of how far the club have come.

Heading into the stadium, there appeared to be something of an optimistic/cautious  mood spreading amongst the home fans.

Southampton, on paper, looked stronger. For the first 20 minutes, that appeared to be the case. Adam Lallana, especially, was in stunning form and orchestrated a number of Saints attacks. They deserved their opener when it came.

But Maya Yoshida’s goal appeared to send a jolt of electricity through the Hammers, who swiftly turned the game around. Matt Jarvis equalised, before Carlton Cole made it 2-1 from close-range.

Saints boss Mauricio Pochettino was unhappy with the first goal – saying that he wouldn’t blame his defenders as it should have been chalked off for offside.

At full speed the linesman appeared to make the right decision. Replays showed it was tighter than tight.

But it stood and the Irons went from strength to strength. Southampton continued to threaten – they peppered the home goal with shot after shot – but Adrian was rarely forced into a testing save and Kevin Nolan’s goal sealed a deserved victory.

The noise inside the ground when his bicycle kick slapped the back of the net was tremendous. It’s hardly surprising. Not only was it redemption for the skipper, disgraced and threatened with exile last month, it was a sign of genuine progress.

Allardyce came in for a fair bit of stick when results didn’t go the Hammers’ way earlier this season. But he has rallied the troops, they are believing and the club are climbing up the table.

Even without the mercurial talent of Ravel Morrison and the inspiration of big Andy Carroll, the Irons defeated a heavily-fancied passing team with a brand of intoxicating, pressing football.

Granted, they didn’t keep the ball as well as Southampton but few teams do. They had a gameplan, stuck to it and reaped the rewards.

They’re currently 10th and have the ability to keep climbing. In sacking season, David Gold and David Sullivan deserve enormous credit for sticking with Big Sam.

Four wins from four in February, nine goals scored and one conceded. No wonder the journalists are flocking to east London!