The march must go on say supporters 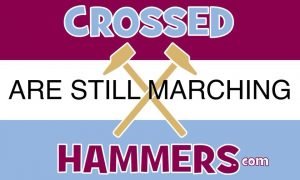 Facebook group ‘Crossed Hammers’ say they are still marching despite a statement from the Real West Ham Action Group saying the march on 10th March has been cancelled.  The group membership has increased to 7,000 members in a matter of hours after they announced ‘We are still marching!’

West Ham United Independent Supporters’ Association (WHUISA) who pledged allegiance to the RWHFAG said: “We’re all a bit shocked about the march announcement. We’re looking at options and will have more info in the morning. We weren’t in favour of the cancellation.”

KUMB have said: “For the record, the decision to abort the march was taken solely by the RWHFAG – which is of course their prerogative, given that the march had been arranged under their banner. As far as we are aware, none of the members of WHGU were consulted before this decision was reached (WHUISA and Hammers Chat have already confirmed they were not involved).

Had we at KUMB been consulted, we would have indicated our desire for the RWHFAG to proceed with their march for it is our opinion that few if any of the points we raised during negotiations with the club have been satisfactorily answered at this stage. As a result, I have written to all members of West Ham Groups United this evening to confirm that KUMB.com no longer wishes to be considered part of the WHGU umbrella organisation.

It is our view that by remaining part of WHGU we would be seen to be in agreement with the decision to postpone next weekend’s protest. Our readers have clearly indicated that they disagree with this and, as always, we are led by them. However, we thank the RWHFAG for offering the fan base this unique opportunity to have its collective voice heard as a result of their considerable efforts.We now turn our attention to maintaining pressure upon the Board to deliver real and effective change at West Ham United – the sort of change thousands of supporters have argued passionately for in recent weeks, and who were given real hope by the prospect of the march.”

HammersChat also part of WHGU have said tonight: “We were not aware of any decision to cancel the march until we were notified a few minutes before the announcement. Our stance has always been with the majority of our members on the forum, which was to march next Saturday.”

11 comments on “The march must go on say supporters”