The Paqueta deal…by the man who made it happen 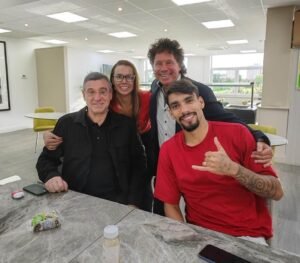 A delighted Barry Silkman (third left) announces his part in the Hammers historic deal on his Facebook page.

And he has every right to be proud of himself declaring on his Facebook page that, with backing from David Sullivan, he has sealed the biggest deal in the history of West Ham .

Silkman spoke exclusively to ClaretandHugh immediately after completing the deal claiming that after  over 40 years in the game this was also the biggest deal he has ever done.

He said:” I’ve been a player, coach and  agent and go back to the days of Roberto Carlos but this was by far the most intense set of negotiations in which I have ever been involved.

Initially Lyon wanted a fee, which would have only been within  the budgets of the top four club, but we have got it down to West Ham levels although it is of course their biggest ever signing!

Along the way between 100 to 150 e mails the same number of phone calls and around 100 texts were involved but we have done it and everybody at the club, along with myself of course, is absolutely delighted.”