West Ham boss Manuel Pellegrini hailed his side for their performance after they eased to a 2-0 win over Norwich City on Saturday.

The Hammers were never in trouble at the London Stadium as they enjoyed a dominant display against Daniel Farke’s newly-promoted men. 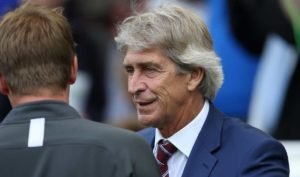 Goals from Sebastian Haller, his first in front of a raucous home crowd, and Andriy Yarmolenko ensured that the Irons took all three points and Pellegrini was delighted with the performance, particularly against a team who have scored against both Liverpool and Chelsea already this season.

Per BBC Sport, he said: “I think it was a massive performance as we played against a very good team who had played well against Chelsea and Newcastle. Tim Krul was their best player on the pitch. He played an unbelievable game.

“We didn’t start the game well, the first 15 minutes they had the ball and we couldn’t recover it but they still didn’t create chances. After that we recovered and showed what we could do.

“Sebastien Haller is a complete player. He scores goals but works a lot for the team as well. He will continue improving in every game.”

The victory moves the Irons into fifth, with the Irons winning two, drawing one and losing one of their first five games.

It improves the goal difference, too, leaving Pellegrini’s men with -1 instead of -3.

Of course, Arsenal play Spurs in the north London derby on Sunday, so let’s hope for a draw in that one so the Gunners don’t overtake us on points!