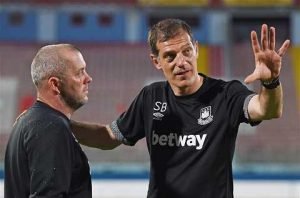 Slaven Bilic is set to bring his old pal and former Hammers room mate Julian Dicks in from the cold of top level football by appointing him as a coach at West Brom.

According to the local paper the Express and Star former coach Jimmy Shan has left the backroom team and The Terminator is strongly fancied to replace him.

Dicksie is currently managing Heybridge Swifts after leaving the Irons when Slav lost his job, but a Hawthorns reunion looks to be on the cards.

It doesn’t take a big stretch of the imagination to see him involved in the West Brom set-up with his old mate.

Apart from his spell at the Hammers, Dicksie has been involved in non league coaching and management at Wivenhoe Town and Grays Athletc before taking on the West Ham Ladies and moving on to the first team with Slav.

Last season he turned Heybridge’s fortunes around but given the choice of of remaining as manager of the Isthmian League outfit or moving into the Championship doesn’t look a choice which will take too much thinking about.

2 comments on “The return of Dicksie”