Three Hammers with plenty to prove back in training

Yarmo – could be available for Wolves clash

Three Hammers with plenty to prove are fit and ready to return for the remainder of the Premier League season!

Football: London has revealed that Jack Wilshere, Ryan Fredericks and Andry Yarmolenko were all involved in pre-season training at Rush Green as the players returned to action in small groups.

Ryan Fredericks has also returned after damaging his shoulder when ‘challenged’ by Rodri although he is likely to find it tough getting past Jeremy Ngakia who has been outstanding since replacing him. 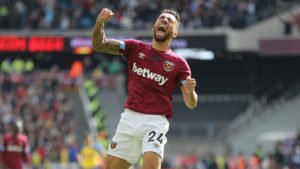 Probably, alongside Wilshere, the biggest challenge of all is facing Yarmolenko whose injury record has become close to horrendous since arriving at the London Stadium.

He was  recovering from injury when he arrived at the club and made just five appearances before adding 15 this term which sadly places him in the Andy Carroll category.

Bought for £18 million the Ukranian will be keen to make an impression withe a possible shop window looming for him.

The Ukrainian had suffered a thigh muscle problem which took far longer to recover from than initially anticipated. He had a couple of run outs for the under-23s before Covid-19 hit but that’s it in 2020.
Permalink