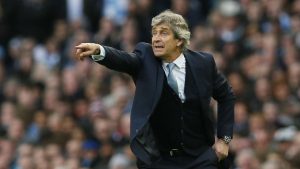 West Ham are preparing a three year contract for Manuel Pellegrini on an annual salary of around £10 million a year with the deal set to be agreed over the next 48 hours.

The 64 year old will meet the board for the first time tomorrow evening with the details set to be put into place on Tuesday at David Sullivan’s Essex home.

It’s the biggest commitment the Hammers board has ever made on a managerial appointment as they prepare to give the Chilean boss total control of all footballing matters.

There is huge confidence  that the club have their man and they are determined to give him an entirely free hand with David Sullivan making his promised step back from the de facto Director of Football role.

He has agreed that Pellegrini will bring in a Head of Recruitment of his own choosing and that they alone will make decisions on football matters with no interference from elsewhere.

15 comments on “Three year deal and full control for Pellegrini”