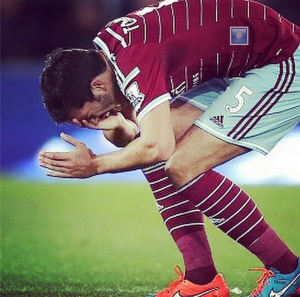 James Tomkins shocking play-acting at Everton on Saturday – during that handbags confrontation with Ross Barkley – was quite simply shameful!

A couple of comments from the Facebook forum – and nobody excuses the Everton midfielder – say it all: “Both players were a disgrace. I don’t want to see that from any player, regardless of what shirt they’re wearing.”

And: “They were cheating. Plain and simple. Just embarrassing. I’d be interested to hear Tomkins explanation to my seven year old son asking me: “Why is he pretending the other player hit him the face.”

In a word Tomkins behaviour was inexcusable and you really have to worry when you see one of our guys rolling around like that when absolutely nothing happened of any consequence.

The club will never tell us of course but if the bloke isn’t hit with a wage deduction as punishment that will be equally shameful.

It’s not the first time he has been guilty of bad behaviour of course and it has to stop. We can hardly be throwing stones in the direction of others when we see that sort of behaviour going on from our own.

Word to the co-chairman and manager: “Punishment  required AND NO REPEATS!”

4 comments on “Tomkins behaviour was shocking!”