The trial of West Ham footballer James Tomkins for assault has been delayed after police and prosecutors temporarily lost CCTV footage of the alleged incident. Tomkins, 25, was due to stand trial at Basildon’ Magistrates Court after he was accused of assaulting a police officer, being drunk and disorderly in a public place and obstructing a constable outside the Sugar Hut nightclub on December 21 – he denies all the charges. His defence team applied for the case to be dismissed after prosecutors failed to produce a tape showing footage from the Brentwood nightclub. They claimed it would be unjust for the trial to go ahead without it as it could support Tomkins’ case. An evidence log showed the recording was handed over for forensic examination but had since gone missing. The tape was later found following a search, but as a result of the delay the trial was adjourned to a later date. 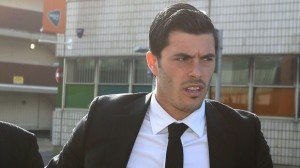