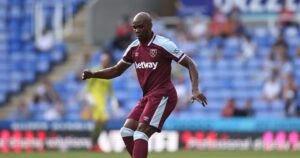 West Ham fully expect to see Anglo Ogbonno back in action for the club soon as he continues to make a full recovery from knee surgery.

Oggy posted on Instagam that he’s now in the gym and our insiders declare him to be in good shape as he works hard to be offered the new deal that the club are keen to give him at the end of the season.

We were told: “He has been a tremendous servant to this club and will more than deserve a new deal.  He’s doing very well indeed.”

There’s a chance he could appear in two or three games at the end of the season but it’s probably more likely he will instead return for pre-season and be 100 per cent ready for the 22/23 campaign.

He’s made great progress from the injury he received against Liverpool last November and is now in his seventh season at the club.

He was regularly linked with a return to Europe at one stage in his Irons career and has been far from first choice at times but has remained an uncomplaining true professional dedicated to the club through thick and thin!