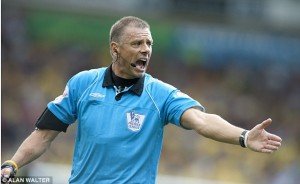 The referee’s organising body has denied claims by Mark Halsey they have put pressure on refs to claim they had not seen controversial match incidents.

ClaretandHugh covered Halsey’s comments yesterday after they had appeared in the national press and followed closely on the Sergio Aguero/Wimston Reid elbowing affair.

The organising body for elite referees in England, the PGMOL (Professional Game Match Officials Limited), has denied outright that it has every pressured officials into saying they hadn’t seen match incidents.

Halsey claimed that he was told by the refereeing body to say he had not seen incidents in matches when decisions had gone to appeal.

The 55-year-old, who retired at the end of the 2012-13 season, made the comments in a debate over Aguero’s appeal against a three-match ban.

But the PGMOL told MirrorFootball in a statement: “Match officials submit their reports, including critical incidents, directly to the FA.

Match officials ensure that their reports are a full and accurate description of the incident. There is no pressure from the PGMO to include or omit anything.”