Total failure if we fail on big names 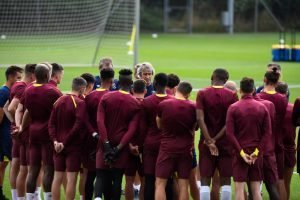 The rumour mill has gone into overdrive and West Ham have been linked with ambitious moves for several exciting stars. Yerry Mina, Felipe Anderson, Mateo Kovacic, Jack Wilsure and Bruno Fernandes are among the names linked with a move to the London Stadium as the Hammers prepare to bolster Manuel Pellegrini’s ranks.

They are unlikely to land them all but two midfielders and a central defender are on the way it seems and possibly under the new manager some real calibre will land up at the London Stadium.

This time – under the new manager – it could be the turn of Chicharito as there is clearly much more to come from him with some scintillating World Cup displays.

If you read a review of William Hill and find the best prices on the market you will see that the Hammers are 4/1 to go down next season.

Only Cardiff, Huddersfield, Fulham, Watford and Burnley have shorter odds than them, suggesting there is still scepticism about West Ham’s quality levels. They are also outsiders to secure a top half finish, priced at 13/8. But that might tempt a few punters after seeing the sort of names with which the club has been linked.

Croatia star Kovacis has become disillusioned with his lack of game time at Real Madrid and the Hammers are understood to have opened talks to sign him.

They have also lodged a  bid for Fernandes, who played well for Portugal at the World Cup, and they have registered an interest in Lazio’s Felipe Anderson, one of the finest young players in Serie A.

If they land even one or two of those players, it would leave them with a lot more quality in midfield and the likes of Chicharito would benefit from better service.

The defence is a clear concern as West Ham have leaked goals over the past few years, and securing the services of Mina would represent a huge coup. He is likely to be in high demand after his goalscoring exploits and defensive solidity displayed at the World Cup, but it is not beyond the realms of possibility to imagine him moving to east London. They are also in for Danish defender Jannik Vestergaard.

They are now led by a Premier League title-winning manager in Manuel Pellegrini and as has been said many times he is unlikely to have agreed to take over if he were not promised significant backing in the transfer market.

The Premier League is probably the most competitive league in the world, but we  finished 13th last season despite enduring a miserable campaign.

They were only two points behind 10th placed Newcastle, so with a more successful manager and a few quality reinforcements, there is every reason to think they can finally break back into the top half of the league.

Anything less should be considered a total failure if they follow through on their ambitious plans to bring in stars like Kovacic and Fernandes.

7 comments on “Total failure if we fail on big names”