Posted by Sean Whetstone on September 11, 2014 in News 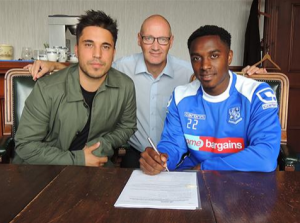 Manager Rob Edwards said: “Matthias is a player we’ve been watching for a while and I’m pleased to be able to bring him to Tranmere. We’ve signed him on a youth loan so he can spend some time with us and hopefully we can help him develop and he can help us on the pitch. He’ll add to our attacking options and is a player who likes to run at defenders and can score goals too. I’d like to thank Sam Allardyce and West Ham for allowing Matthias to join us on loan.”

His initial loan period has been agreed  until 11th October 2014 but under Football league youth loan regulations he would be allowed to remain on loan with Tranmere until his 21st birthday which is on 28th January 2015.