Posted by Sean Whetstone on August 1, 2019 in News, Whispers 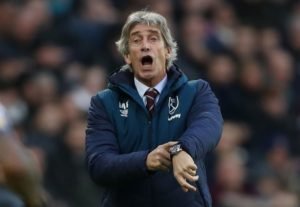 With seven days to go before the transfer window slams shut West Ham’s transfer business is eerily quiet at present.

Many supporters are expecting at least another striker after the departure of Marko Arnautovic, Lucas Perez and Andy Carroll with only Seb Haller in return and perhaps a back up defensive midfielder to cover Declan Rice after Pedro Obiang’s departure.

West Ham has spent the vast majority of their summer transfer budget and we will not be seeing any more big-name or money signings in the next week.

You can pretty much forget any transfer rumours that value the player over £5m.

Claret and Hugh understands that Pellegrini has been told he has funds for one more squad player with considerably less than £5m available to spend.

There may be a late twist to the end of the Hammers transfer window as we understand the manager is putting feelers out to find a young centre back to challenge Angelo Ogbonna and Winston Reid for the number three or four spots in the centre of defence.

If Pellegrini and Hussilos can’t find someone like Fabian Balbuena there might not be any further business this summer with the manager accepting his squad as good enough to challenge to better the tenth spot West Ham finished last season.