Travel disruption for FA Cup clash at the London Stadium 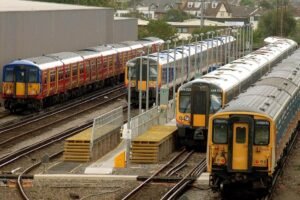 There is significant travel disruption this weekend.

Supporters are advised to check their journey routr before they travel to the London Stadium on Saturday.

No service between Liverpool Street and Southend Victoria.

Services from Norwich/Ipswich/Clacton will terminate at Ingatestone. Replacement buses will be running from Ingatestone to Newbury Park for the Central Line.

Basildon services will be diverted to start/terminate at London Fenchurch Street, and will call additionally at West Ham.

No service on the Rainham Line.

Buses will replace trains between Lewisham and Plumstead via New Cross, Greenwich and Woolwich.

On Saturday, trains between London Charing Cross and Hayes will additionally call at Lewisham.

Some lines between London Waterloo and Clapham Junction and all lines in the Wimbledon area will be closed all weekend for maintenance and renewal work.

← Watching West Ham is bad for your heart
Poll: Will West Ham win, lose or draw against the Baggies? →