Posted by Sean Whetstone on November 2, 2019 in News, Whispers 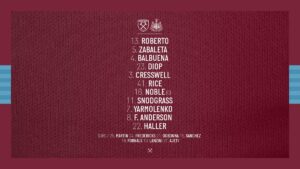 West Ham have got off to the worst possible start by conceding two goals in the first twenty-two minutes.

Manuel Pellegrini named an unchanged side to face Newcastle but the team that drew against Sheffield United conceded the first goal after 16 minutes.

Newcastle fans were surprised that their team have scored for the second match running and again it is a defender who put them ahead.

Jonjo Shelvey swung in a free-kick deep to Joelinton who heads back across goal to the waiting Ciaran Clark.

The Republic of Ireland international outjumps his marker and thumps in the opener.

Just six minutes later West Ham conceded again to another set-piece and another goal from a Newcastle defender.

That allowed Federico Fernandez to outjump the Spanish keeper and head into the empty net. So poor from West Ham!

4 comments on “Two nil down in twenty two minutes”