Two who could solve our keeper dilemma

It’s 100 per cent correct that the Hammers should be looking at signing a new goalkeeper (or two) but the bigger and less easily solved question is WHO?

Enough has been said of Joe Hart – he’s on his way back to Manchester with I suggest a bleakish future very much before him.

As for Adrian, he’s done nothing like enough to take advantage and in reality, just like the England stopper is prone to calamitous errors.

Neither of them command the area and whilst nobody is perfect these two  have become liabilities and highly imperfect. 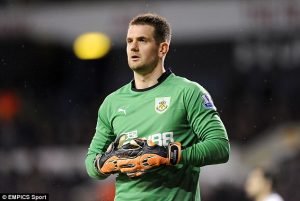 So who should we consider?  Should Stoke go down, Jack Butland will be looking to protect his career with a move.

At Burnley Nick Pope has had a fantastic season and the Clarets aren’t likely to part with him but Pope’s elevation has meant Tom Heaton (right), who was their number one prior to injury, and very much on Gareth Southgate’s radar for the regular England number one slot, is now playing second fiddle and is  unlikely to be happy for that to continue next season.

He has a contract until 2020 at Turf Moor and could be available at a fee of around £10 million which remains a lot for a keeper. However, if we are serious about moving forward we have to dig deep.

Both he and Butland are quality performers and would provide a solid foundation. For me either would be the perfect starting point for a new look West Ham for 2018-19.

This club have invested big in goalkeepers before. In the 60’s Ron Greenwood paid a world record fee of £65,000 to bring Bobby Ferguson from Kilmarnock to West Ham.

In the 70’s John Lyall invested heavily in big Phil Parkes paying QPR another world record fee at the time of £565,000. Of course there’s no way we could go that big these days.

Football finances are a whole different ball game but both Greenwood and Lyall recognised the value of a top class ‘keeper. The prices may have changed. The value remains the same.

6 comments on “Two who could solve our keeper dilemma”