West Ham  continue their preparations for the restart of the 2022/23 domestic and European season with a trip to northern Italy on Saturday.

West Ham coach Mark Warburton explained after the match at Cambridge that the players will be looking to step up level as they play this game ahead of the match against Fulham.

Aaron Cresswell is likely to be okay after coming off at the Abbey Stadium as a precaution and we can expect to see Tomas Soucek back in midfield probably alongside Flynn Downes. 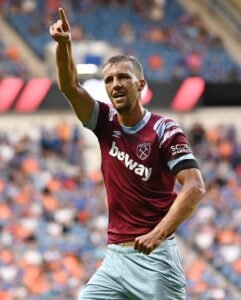 Soucek set for a return

Something closer to a normal first team is looking likely with Benrahma and Fornals hopefully behind Scamacca,

The Hammers will be making their first visit to the city of Udine in a region, which is situated between the Adriatic Sea and the Alps in the far north-east of the country, near to the border with Slovenia.

Udinese Calcio were formed in 1896 and play at the 25,000-capacity Dacia Arena. Owned by the Pozzo family, who also own Watford, Udinese are currently competing in their 50th season in Serie A.

Saturday’s game will be a real test as to where the Hammers are at tight now and a far tougher test affair that the Cambridge match.

The Udinese team has made an encouraging start to the Serie A campaign, losing just three of 15 matches to go into the mid-season break in eighth place on 24 points.

West Ham will be live streaming Saturday’s game on their YouTube channel, while you will also be able to watch on their official website and App.

You can also follow the action via our live blog on whufc.com and  app and across the club’s social media channels.