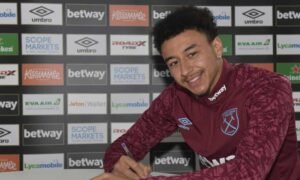 The picture we are all waiting to see this summer

Ole Gunnar Solskjaer is ready to allow Jesse Lingard out of Manchester United without serious hassle this summer as he bids to beef up his squad.

The Manchester United boss knows he has to sell the 28 year old and probably two or three others as he bids to raise the funds to being in Aston Villa’s Jack Grealish.

Coronavirus has hit the club’s finances in a big way and Solskjaer has been told he will only have £80 million for summer dealings.

As a result he is ready to let Jesse and Juan Mata leave as he looks to push his dfnancial resources over the £100 million mark.

However, one agent close to United told us that he believes the Reds will do well to get £15 million for the 28 year old attacking  midfielder who has done so well at West Ham since his arrival.

He warned United: “It will be the flattest summer window ever and with the player’s wages at around £107k a week plus bonuses United may struggle to get a price of £20m to £25 million they are hoping for.

“Good player of course but there’s no sell on value in him on a three year contract so the price could fall a bit in the current circumstances.

“And given the budget that Ole has been given – tiny in United terms – they will understand that very well.”

Only Newcastle and Burnley showed an interested in the player ahead of his loan move to the Irons and with both currently struggling in the  bottom six they become unlikely prospects for him after settling in so well with us.

And Manchester United believe that his relationship with manager David Moyes is the key to West Ham becoming his next destination.