Valencia and Kouyate could be back 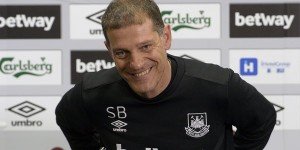 He explained: “Sunday was a training and regeneration day for the guys who played, and we have a couple of doubts for Tuesday’s game, but I will know after training on Monday.

Valencia could be back, and Kouyate. All the guys who played against Wolverhampton are fit, and if we can add at least one of those two, who had little injuries against Liverpool, it will be good.” Slav told assembled press.

“It happens. It was one of those injuries which didn’t look big at first, but it took him out for four weeks. Then he played against Southampton and Liverpool, but it came back again, so it looks like three or four weeks once more. He is a very brave guy who wants to come back as quickly as possible, which is on hand one good, but on the other hand they can say I’m fit but it happens again. Hopefully he will be back soon for us.”