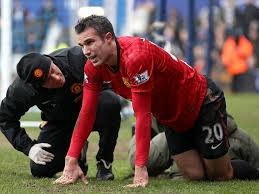 Robin van Persie could be rested for Manchester United’s Saturday night trip to the Boleyn.

The Dutchman took a hefty blow to the back of his knee and was taken away on a stretcher in the dying minutes of the Red Devils’ Champions League 3-0 victory over Olympiacos on Wednesday night.

ClaretandHugh’s northern correspondent told us this morning that United don’t believe the player has suffered no real lasting damage and they will monitor him over the next 48 hours.

Boss David Moyes has already been informed that van Persie will be in some discomfort for a few days and will also have extensive bruising to the area.

With that in mind, the forward could drop to the bench at Upton Park or be rested for next Tuesday’s derby clash with rivals City.

That could give Danny Welbeck another chance to impress alongside Wayne Rooney, although Moyes does have the option of playing Juan Mata in his more preferred advanced role.

← Allardyce: “United can deliver at any time”
Diame deal on the cards? →
Click Here for Comments >