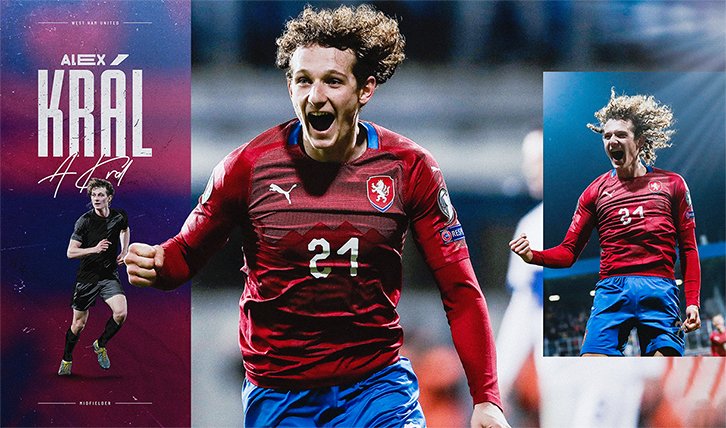 Alex Král joined the Club in the last few hours of the transfer window on loan, with the view of making his move permanent next season.

His arrival now means the Hammers have 3 Czech internationals in the squad along with teammates Tomáš Souček and Vladimír Coufal. Král has played 22 times for the Czech Republic, including twice against England and has netted 2 goals in that time.

Born in the city of Košice in Slovakia in May 1998, Král’s family moved across the border to the Czech Republic, settling in Štýřice when he was a young child.

There, he began playing football at SK Moravská Slavia Brno at the age of six, before joining Zbrojovka Brno at nine. At 14, he was scouted and recruited by Slavia Prague and moved to the Czech capital to continue his development.

While with Slavia’s academy, Král was capped regularly by Czech Republic at youth level, earning more than 50 caps combined for the U17s, U18s and U19s, helping the latter reach the semi-finals of the UEFA European U19 Championship and being named in the Team of the Tournament in 2017.

Earlier the same year, Král had left Slavia for FK Teplice, where he made his senior debut in a 1-0 Czech First League win at Hradec Kralove in May 2017.

After 48 appearances for Teplice, at the age of 20, he returned to Slavia in January 2019, debuting alongside Souček and Coufal in a 2-0 win over his former club.

He went on to feature 30 times, starting both legs of Slavia’s UEFA Europa League quarter-final tie with Chelsea, and registering an assist in a 2-0 Czech Cup final win over Banik Ostrava in May 2019.

After winning the Czech-Slovak Super Cup that July, Král joined Russian Premier Liga club Spartak Moscow and immediately established himself in the team that reached the Russian Cup semi-finals, then finished second in the league the following season.  At international level, he debuted in a friendly in Prague in March 2019 and has been a regular in the squad ever since, making 16 starts, earning 22 caps and scoring two goals.

Two of those caps came in games against England – a UEFA Euro 2020 qualifying win in Prague in October 2019 and narrow defeat at Wembley at Euro 2020 in June this year.