Posted by Sean Whetstone on May 19, 2020 in Videos, Whispers 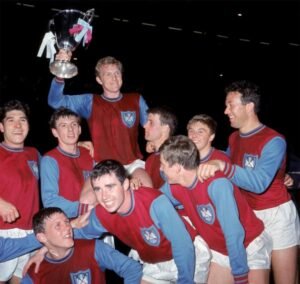 The 1965 European Cup Winners’ Cup Final was won by West Ham 55 ago today!

West Ham began the game brightly, but despite chances at both ends, there was no score at half-time. The breakthrough came in the 70th minute when Ronnie Boyce threaded a pass between two defenders and Alan Sealey scored from a difficult angle. Two minutes later, a free-kick to West Ham was not cleared; Bobby Moore crossed the ball, Radenkovic failed to collect the ball and Sealey scored a second goal to seal the match for West Ham.