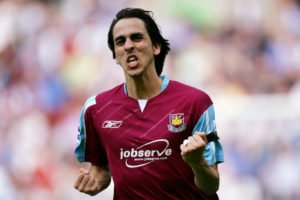 The ex-Hammer and Israel international attacking midfielder was born in the city of Dimona on 5 May 1980 and made his name as a youngster with Hapoel Be’er Sheva and Maccabi Haifa before moving to Spanish club Racing Santander in 2002. Three years later, Benayoun was on his way to newly-promoted West Ham for what turned out to be a bargain £2.5million fee.

After debuting in the season-opening 3-1 win over Blackburn Rovers, the then 25-year-old scored his first Premier League goal in a 4-0 thrashing of Aston Villa in September 2005 more famous for Marlon Harewood’s hat-trick.

January 2006 saw Benayoun produce arguably his signature moment in Claret and Blue – a sumptuous chip in a 2-0 win over Fulham at the Boleyn Ground.

The No15’s first season in England ended with a match-winner in a 2-1 Premier League victory over Spurs and an FA Cup final appearance as West Ham were edged out by Liverpool on penalties after a thrilling 3-3 draw in Cardiff. The 2006/07 season was more fraught but had a happier ending as Benayoun played a central role in the Irons’ Great Escape from relegation, scoring in a vital 3-0 win at Wigan Athletic in late April 2007.

After moving to Liverpool in summer 2007, the talented playmaker returned to east London in summer 2012, on loan from Chelsea, but played just six games due to injury.

However, that statistic cannot overshadow the impact Benayoun made during his first spell in Claret and Blue.

Below watch every goal and assist by Yossi for West Ham.