Posted by Sean Whetstone on May 23, 2020 in Videos, Whispers 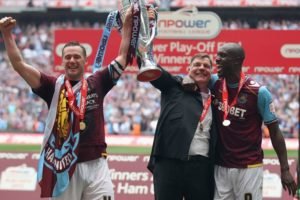 Eight years ago Ricardo Vaz Te struck a late winner as West Ham defeated Blackpool in an absorbing Championship play-off final to seal their return to the Premier League at the first attempt. The result ensured that manager Sam Allardyce made good on his promise to take the Hammers back into the top flight after his team narrowly missed out on automatic promotion at the end of the regular season.

The Hammers had led at the breakthrough a Carlton Cole strike but after Thomas Ince – son of former Hammers midfielder Paul – levelled shortly after the restart, the match became increasingly stretched and ragged.

Both teams wasted good opportunities to score but it was the Hammers who did grab what proved to be the decisive third when the unmarked Vaz Te, a January signing from Barnsley, drilled the ball into the net from 12 yards.

It was a goal that meant West Ham won on their first appearance at Wembley in 31 years, in doing so becoming the first team since Leicester in 1996 to bounce straight back to the Premier League through the play-offs.