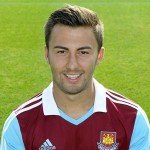 West Ham Development Squad took on Spurs U21’s in their first game of the season on Monday. After his loan at Crawley Town finished Raphael Spiegel returned as keeper, Dan Potts, Reece Burke, Josh Cullen and Elliot Lee all returned from their brief encounter with the first team against Sampdoria to play for the Under 21s’s while new signing Diego Poyet made his U21 debut despite being on the first team bench on Saturday along side Reece Burke. Young Reece Oxford also made an appearance. Unfortunately Elliot Lee couldn’t add to his 9 goals in pre season and the full time result mirrored close to what the first team achieved on Saturday with a defeat by one goal. Kieran Bywater netting the only West Ham goal in a game that finished 2-1.