Posted by Sean Whetstone on May 2, 2020 in Videos, Whispers 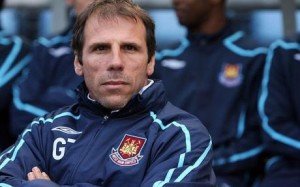 The 2008–09 season saw West Ham United compete in the Premier League, where the club finished in 9th place.

The video features every goal scored in a season which saw the arrival of Gianfranco Zola as manager and his team playing some free-flowing football with emerging young talent.

On 7 September 2008, it was reported that Zola had been interviewed in Rome for the vacant manager’s position at West Ham and had “impressed the Club’s representatives” at the interview. Two days later, he agreed a three-year contract to manage West Ham United, replacing Alan Curbishley, who resigned following differences with the board. He was unveiled as manager on 11 September, despite not having the required UEFA A managing licence.

Zola also received praise for integrating more youth products into the first team. The likes of Junior Stanislas and Zavon Hines were given their debuts. The duo and first-team youngsters Jack Collison and James Tomkins all scored their first goals for the club during his tenure.

The Hammers were dumped out of the third round of the League cup by Watford to a narrow 1-0 defeat while it took a fifth-round replay for Middlesborough to dump the Irons out of the FA Cup that season.