Posted by Sean Whetstone on May 1, 2020 in Videos, Whispers 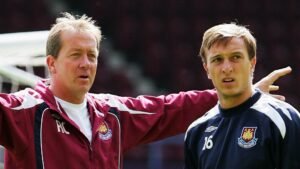 The 2007–08 season saw West Ham United compete in the Premier League, where the club finished in 10th place in the table winning 13 games, drawing 1o and losing 15 matches. The Hammers scored 49 points scoring 42 goals and conceding 50 leaving them with a goal difference of minus eight.

Managed by Alan Alan Curbishley in the Icelandic era and Dean Ashton was the Hammer’s top goal scorer of the season with twelve goals in all competitions.

West Ham were knocked out of the FA Cup in the third round by Manchester City while Everton knocked the Hammers out the League cup in the fifth round.

Christian Dailly left West Ham for Glasgow Rangers. The Hammers biggest win of the season was a five-nil thumping of Derby County away in November 2007. The Hammers goals came that day from Lee Bowyer (2), Matt Etherington, a Derby own goal and Nolberto Solano.